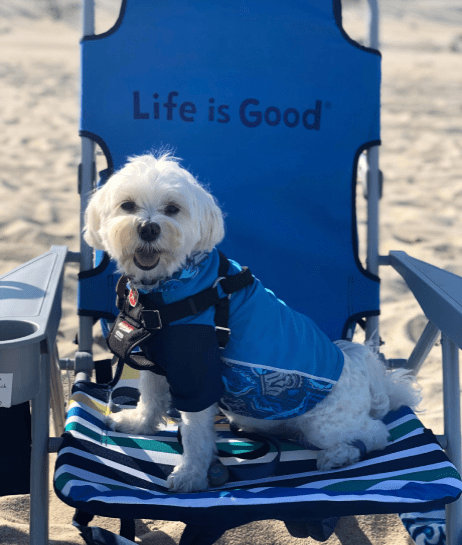 Benito the Maltese was diagnosed with ITP or Immune Mediated Thrombocytopenia on New Year’s Eve 2017. ITP is a condition where the immune system attacks its own platelets because they are erroneously seen as foreign invaders that must be eliminated.

Current medical protocol to treat this type of immune disease is to find a combination of steroids to suppress the pet’s immune system, thereby stopping the attack. Benito responded well to Prednisone for his ITP and was eventually weaned off because steroids are hard on the body.

About a year later he relapsed and was put back on Prednisone. He recovered once more and was weaned off his meds again 5 months later. Unfortunately, he relapsed yet again 3 months later and was admitted to the hospital with a reading of zero platelets. This time his hematocrit also dropped to 14% indicating anemia; possibly also immune mediated. He was started on Mycophenolate and given Vincristine to help his body produce more platelets.

Two days later his platelets were still reading zero and his hematocrit remained at 14%. Benito’s mom called Safari and after reviewing her case, we overnight shipped stem cells to be administered intravenously. The day before the cells arrived Benito received a blood transfusion and his pcv had come up a bit to 24% but his platelets still did not register. He received his I.V. stem cells that afternoon and by 9:00 that night his platelets were up to 11k. The next day his platelets went from 96k to 116k the following day, and back into the normal range a few days after that.

His pcv and platelets have remained in the normal range since June of 2020. As of a few days ago (March 2021) his mom reported that he is now off all his medication. We’re so proud of him for fighting through this terrible disease and staying strong!