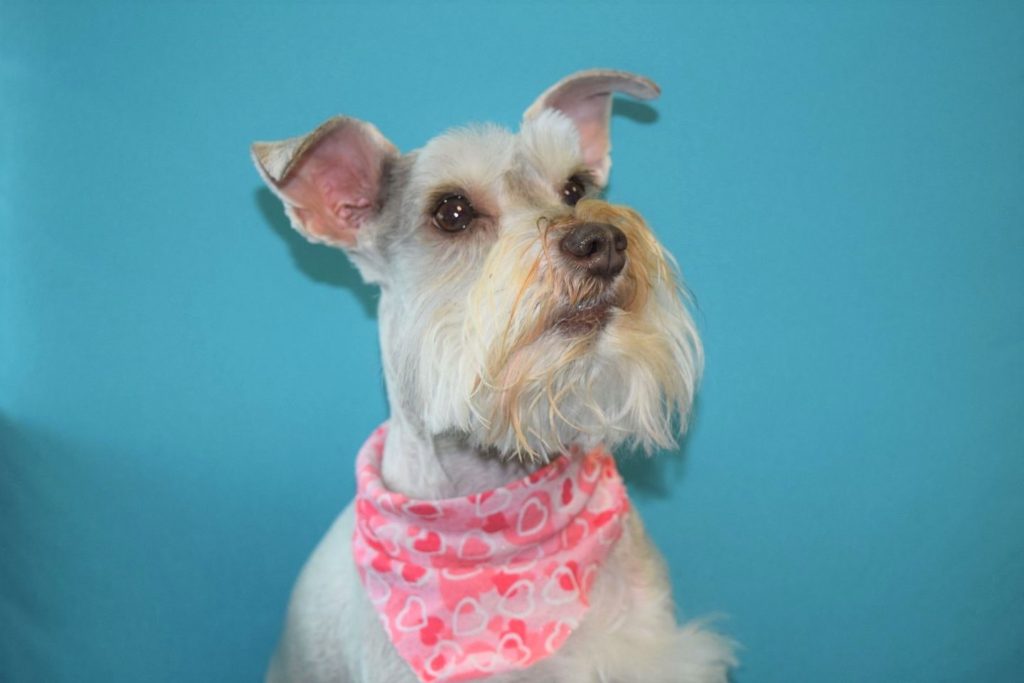 Crystal is a 5-year-old spayed female Miniature Schnauzer who had chronic vomiting and diarrhea for months on end when she was just 2 years old. She was experiencing diarrhea with mucus and blood typical of large bowel diarrhea. Abdominal radiographs revealed inflammation of the bowel with gas distention of the colon. She was put on all the usual drugs, including Cerenia, Famotidine, Metronidazole, and Flagyl. Her condition could be brought under control until her medications ran out but would then flare up again.

A biopsy taken endoscopically from the small intestines and stomach in early November of 2017 confirmed Inflammatory Bowel Disease. Because it is an immune mediated disease, IBD can be treated with stem cell therapy. The stem cells work to reset the immune system so that it stops attacking the gut lining. Normally the body tolerates the essential bacteria in the gastrointestinal system, but with IBD the gut stops tolerating these bacteria., These bacteria however are needed to digest food, so a war zone develops where there used to be tolerance. This leads to a thickening and buildup of the individual gut villi which in turn prevents the absorption of essential nutrients. Stem cells stop this reaction to the gut bacteria, reduce inflammation, and heal the gut.

Crystal’s owners were concerned that she would have to stay on potentially harmful medications indefinitely and worried that she would continue to relapse if her medications were stopped. We suggested stem cell therapy to stop the cycle that kept Crystal on the drugs. Her owners report that Crystal never had another episode of vomiting or diarrhea after her first round of stem cells. That was on November 28th of 2017. A second round of cells was given on February 13th, 2018 as per our Safari recommendations.

Today Crystal is a happy, healthy 5-year-old. She continues to do well to this day, 3 years later.

(IBD) in dogs and cats is a broad term that covers various chronic conditions of the gastrointestinal system that tends to affect the middle aged and older. Inflammation of the lining of the stomach, small intestine, and/or colon is thought to be an abnormal response by their immune system, a hypersensitivity to gut bacteria, or even food allergens.

Symptoms include chronic (recurrent) vomiting and/or diarrhea, weight loss, lethargy, fatigue, abdominal pain and gas. You may hear gurgling or rumbling in the pet’s abdomen and may even see blood in the stool. Watch for any straining while defecating.

Cat breeds genetically predisposed to IBD are Purebred and Siamese.

Inflammatory bowel disease (IBD) is usually treated with immunosuppressive and antibiotic medications. Intravenous fluid may be needed if bouts of severe vomiting or diarrhea has caused dehydration. It may be recommended that your pet be switched to a hypoallergenic diet (which is available at Safari). In most cases, this treatment method will not “cure” IBD, but will help by stabilizing body weight, alleviating gastrointestinal symptoms and reducing the immune system’s response. However, even after complete recovery, relapses are common. Follow-up visits to your vet and ongoing drug intervention will likely be required.

Stem cells are a type of cell found naturally throughout the body that become activated when something in the body is in need of repair. This can be in response to inflammation, tissue damage, and bacteria or other foreign invaders. When the body gets overwhelmed due to an ongoing chronic condition or serious acute episode, it may need additional help to fight. Administering stem cells intravenously is like sending in more troops to help the existing fatigued army win the battle.

Stem cells act first as peacekeepers to stop these destructive actions of the immune system. Rebuilding tissues must happen in areas where the war is stopped. However, you cannot rebuild houses in a war zone so the stem cells first act to stop the war. Once this is done stem cells go into “Peace Corps mode” and act to repair the damage caused by the war. Finally, stem cells do what medications cannot, which is help the body to remember not to fight off the gut bacteria in the future. They do this by producing memory T-cells which act to prevent future attacks.