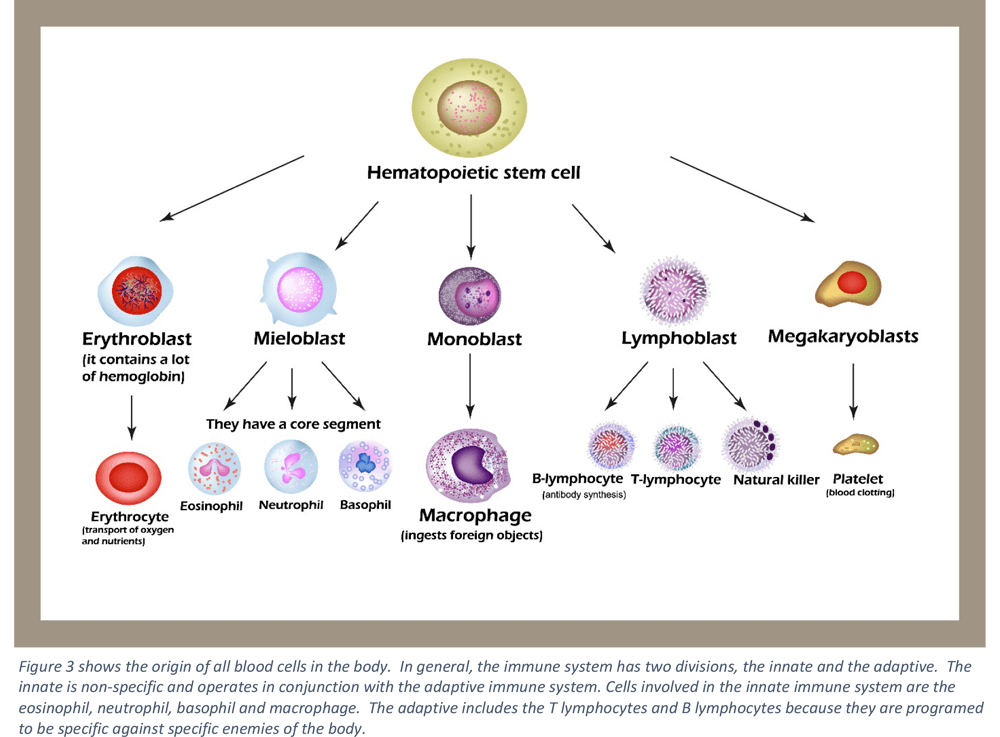 The justification for the use of stem cell therapy to treat immune mediated anemias in dogs can be demonstrated by the successful use of similar therapies in human medicine. The bone marrow is the source of red blood cells, white blood cells and platelets. All these cells come from a cell called a hematopoietic stem cell. Or blood creating stem cell. These stem cells create the three lines of cells that form all three of the cellular blood components (white, red and platelets). Hematopoietic stem cells live within the central marrow of the bones on a loose spongy matrix. The matrix is composed of calcified bony spicules which house osteoblasts and osteoclasts (that build and remodel bone), fibroblasts, reticular cells, and adipose cells (that make up the bone marrow matrix) as well as another stem cell called bone marrow stromal cells(BMSC). These bone marrow stromal cells are stem cells and are essential in producing the chemical stimulus for the hematopoietic stem cells to divide and form the blood cells. So, there are two essential stem cells in the bone marrow, one that produces the blood cells (hematopoietic) and another that provides the chemical instructions for this production (BMSC). 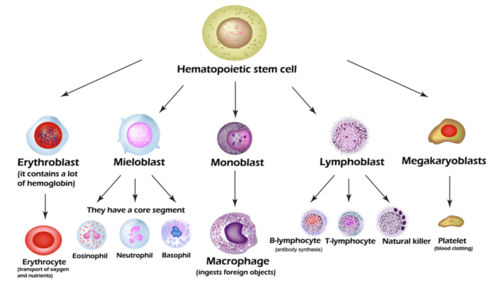 Immune-mediated hemolytic anemia (IMHA) is caused when antibodies are produced against the red blood cell antigens. This causes the red blood cell to be destroyed either within the blood stream or within the spleen. This red cell destruction results in anemia which should stimulate the bone marrow to produce more red blood cells. This regenerative response is measured by identifying baby red blood cells (reticulocytes) in the circulation. When there are not adequate numbers of red blood cells in the circulation it is called non-regenerative anemia (NRA). NRA occurs because the erythroblast has also been targeted in the immune attack. In some cases, the bone marrow failure is due to exhaustion of the erythroblast cells or lack of raw materials such as iron. In human medicine, a similar disease called aplastic anemia(AA) occurs where there is an immune attack on the hematopoietic stem cell itself so that all cell lines are affected and the person has low red blood cells, low white blood cells and low platelets as well. In these cases, human patients are usually given a bone marrow transplant which is really a hematopoietic stem cell transplant. This transplant must be given from a sibling donor or a suitable unrelated donor with matching tissue type. This may not be readily available, and the patient must be maintained with blood transfusions and antibiotics.

Recently it has been demonstrated that mesenchymal stem cells (MSC) from adipose tissue can support the hematopoietic matrix within the bone marrow (1). MSC transfusions have been shown to cure AA patients through the stimulation of the production of a new hematopoietic matrix.

Non-Regenerative Anemia (NRA), Aplastic Anemia (AA), Pure Red Cell Aplasia (PRA) and Immune Mediated Thrombocytopenia (ITP) are similar diseases affecting the production of red blood cells and platelets in the bone marrow. All these diseases respond incompletely to immunosuppressive medications. Allogenic Mesenchymal Stem Cell (MSC) therapy can be used to improve the chances of recovery from these diseases through three paths: immunomodulation, increased hematopoiesis and the promotion of immune tolerance (2) (3).

AA is an autoimmune disease causing total or partial bone marrow destruction. AA is characterized by peripheral blood pancytopenia, which is the reduction in the number of red blood cells and white blood cells as well as platelets. In human medicine, the first line treatment options are hematopoietic stem cell transplant and/or immunosuppressive drug administration (2). In human patients that do not respond to these therapies, mesenchymal stem cells have been shown to improve the hematopoietic niche in refractory severe aplastic anemia.

Pure Red Cell Aplasia (PRA) is an infrequent hematologic complication from hematopoietic stem cell transplantation when the transplanted cells are mismatched with the recipient. Allogenic mesenchymal stem cells have also demonstrated efficacy in the treatment of refractory PRA in humans (4) (5).

Immune mediate thrombocytopenia (ITP) is characterized by immune-mediated destruction of normal platelets and suppression of platelet production that is associated with variable bleeding syndromes. The underlying immune dysregulation results in antiplatelet antibodies directed at the platelet and megakaryocyte surface glycoproteins. These antiplatelet antibodies develop secondary to a loss of tolerance to these surface-antigens of the platelets and megakaryocytes (6).The pathophysiologic mechanisms for the formation IMHA, AA, PRA as well as immune mediated thrombocytopenia (ITP) is complex and involves the production of autoantibodies against the surface membranes of the red blood cells, the platelets and the respective bone marrow precursor and stromal cells. The formation of these autoantibodies by B-Cells requires the interaction of T-cells with the B-cells. Animals with these diseases have been shown to have an imbalance in the number of Inflammatory T-Cells and Regulatory T-Cells (T-reg) (7). Allogenic MSC therapy has been shown in numerous clinical trials to increase the number of T-reg cells (3). T-Reg cells are responsible for immune tolerance. Immune tolerance is the process by which the immune system tolerates cells that may otherwise appear foreign through the release of numerous cytokines that affect the inflammatory T-cells, B-cells, macrophages, and dendritic cells. Immune tolerance is normal and is responsible for the body’s ability to tolerate for example: intestinal bacteria, the unborn fetus, the skin and mucous membrane surface bacteria as well as normal red blood cells and platelets 1 . Mesenchymal stem cells therefore augment the immunosuppressive drug therapies because they possess broad immunomodulatory properties, secreting several biological molecules that influence both the adaptive and innate immune responses (3) (8).

Allogenic MSC are anti-inflammatory, immunomodulatory and regenerative. Intravenous infusion of these cells has been shown to be a safe way to decrease the antibody induced destruction of cells while increasing the production of red blood cells and platelets in humans and animals suffering from various types of immune mediated cell and bone marrow damage.

1 Red blood cells and platelets are not alive, do not have a nucleus and therefore do not have MCH antigens to tell the body’s immune system they are “self”. The immune system must therefore tolerate the presence of these cells. This immune tolerance is mediated by T-reg cells.