Why Stem Cell Safari Is The Best Stem Cell Treatment Provider For Iliopsoas Injury In Dogs? 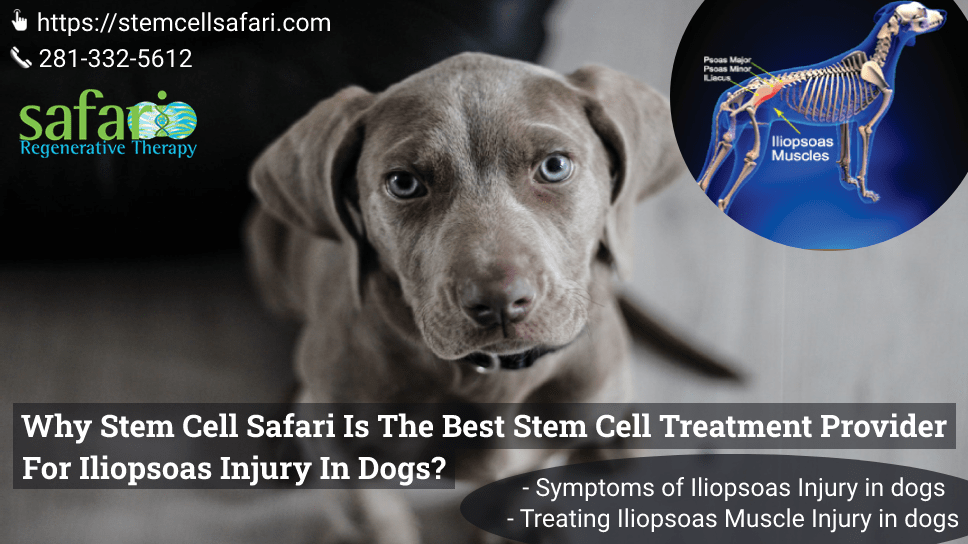 The iliopsoas muscles are responsible for flexing and externally rotating the hip. Three muscles co-function to support the hip in this motion namely the iliacus muscle, the psoas major, and the psoas minor. Iliopsoas Injury in dogs is most likely to occur in athletic pets that have either fallen or overstretched their muscles. It can also be seen in dogs that have some sort of disease in another area, such as hip dysplasia or cranial cruciate ligament disease.

Symptoms of Iliopsoas Injury in dogs

The following are popular symptoms exhibited by an iliopsoas injury dog: difficulty rising or getting up; reluctance to climb stairs or to jump into bed, strange gait such as outward rotation of the leg when walking, or tucked up, or arched back when walking, and difficulty defecating. It is very common for dogs to have sporadic hind limb lameness aggravated by activity, and the dog may not bear weight at all.

It is important for the underlying problem to be identified and treated. When symptoms are relatively mild or moderate, it is common for the veterinarian to prescribe anti-inflammatories and pain medications.

Radiographs, ultrasound of the muscles, and even arthroscopy or MRI may be important in identifying Iliopsoas injury in dogs. Chronic inflammation of the iliopsoas muscles or tendons may be injected with stem cells to reduce the inflammation and restart healing. The method of treatment used such as cold laser therapy, stretching, massage, and trigger point release depends on the peculiarities of the case.

Rehabilitation and conditioning are both very important in the treatment and prevention of iliopsoas muscle injury. Physical therapy can also be combined with cold laser therapy.

In veterinary medicine today, the stem cells that are used come from fat cells. Stem cell safari prepares and stores cells in-house so that they are readily available. They also have their own in-house laboratory and extensive stem cell equipment thus reducing the chances of things going awry. Their stem cell laboratory is state of the art; our equipment and training maximize the number of live cells ready for transplanting. Their stem cell administration and aftercare are also states of the art; they use specialized imaging equipment to get stem cells right to the damaged tissues and they have specially trained staff and all the equipment needed to fully rehabilitate your pet in the post-operation period.