Stem Cell SafariBlogWhat Is Intervertebral Disc Disease In Dogs? What Are The Symptoms And Common Treatment Of IVDD?

What Is Intervertebral Disc Disease In Dogs? What Are The Symptoms And Common Treatment Of IVDD? 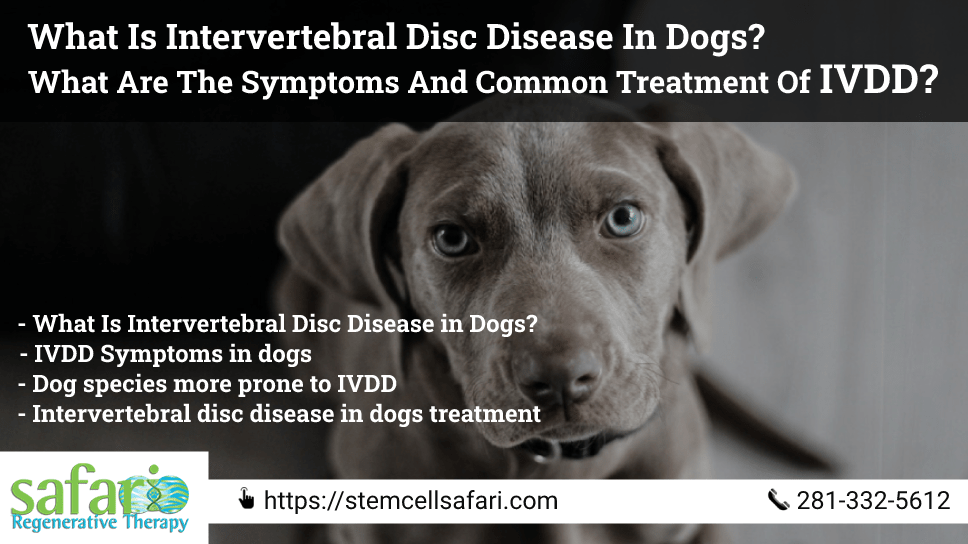 There are so many medical reasons that could cause a dog to experience pain or difficulty while walking. It could either be a soft tissue injury or chronic injuries such as a torn cruciate ligament in the knee or Intervertebral Disc Disease (IVDD).

What Is Intervertebral Disc Disease in Dogs?

The design of the vertebrae is such that it wraps around the spinal cord in order to prevent it from injury. In addition, there are shock absorbers known as cartilaginous discs in between these vertebrae that allow for further protection, especially during the motion of dogs.

The spinal cord is very sensitive, and it plays a vital role in the conduction of nerve signals throughout the body, especially to a dog’s rear limbs. Thus, the measured commencement of degenerative disc disease in dogs is what causes the development of these neurological signs.

IVDD symptoms include diarrhea (it is not unusual to see blood within the dog’s stool), weight loss, fatigue, holding of the head in a stiff upright position, touch sensitivity, reduced activity, pain or weakness within the rear legs and abdominal pain.

There are several IVDD treatment methods. The treatment method usually depends on the stage or level of IVDD. For early stages, all that is usually needed is rest and oral medications such as muscle relaxers and steroids for the pain. However, if a dog has minor to severe pain lasting more than a week, he will need advanced imaging possibly with surgical correction. Dogs with paresis have better odds of fully recovering once they have surgery, and dogs with paralysis cannot go for up to twenty-four hours without surgery. Otherwise, their paralysis will be permanent.

Surgical correction is another intervertebral disc disease dog treatment that involves removing a minute fragment of bone from the vertebrae that are striking upon the affected region of the spinal cord. A veterinarian or neurologist should perform this surgery. The dog is likely to feel a little uncomfortable and need strict rest for the first two weeks.

After that, rehabilitation and physiotherapy are important to assist the dog with mobility. Intermittent use of pain medications could also be necessary, and long-term use of joint supplements is vital.