Stem Cell SafariBlogWhat Are The Symptoms Of Inflammatory Bowel Disease (IBD) In Dogs?

What Are The Symptoms Of Inflammatory Bowel Disease (IBD) In Dogs? 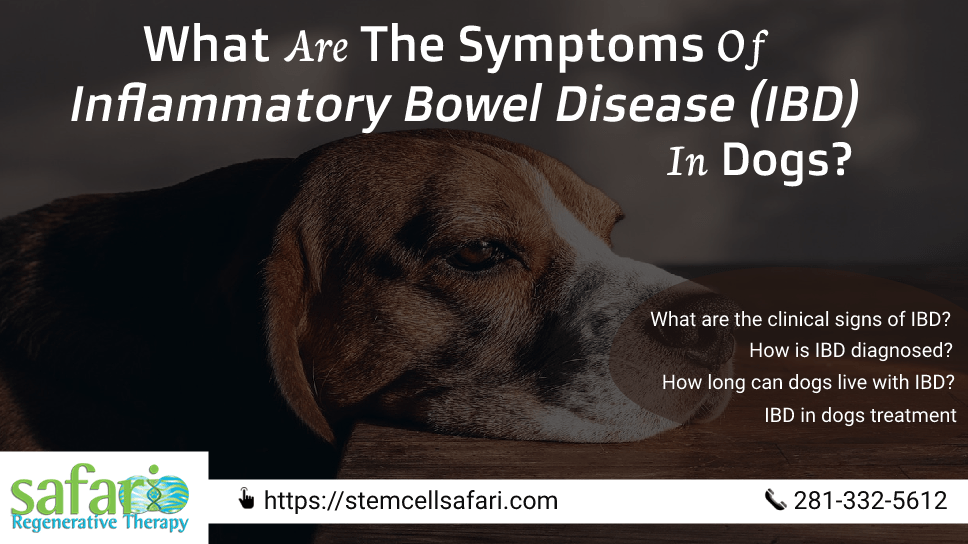 IBD in dogs is a syndrome that is triggered by a precise response to persistent irritation of the tract of the small intestine. It is usually well-defined by the presence of characteristic inflammatory cells within the gastrointestinal tract, once other causes of inflammation (e.g., infection) have been ruled out. It is one of the causes of long-term vomiting and diarrhea in dogs and is usually characterized by weight loss or inability to gain weight despite good nutrition.

It is very different from irritable bowel syndrome (IBS) which is a non-inflammatory ailment affecting movement within the gut and less common in pets.

What are the clinical signs of IBD?

IBD can occur at any part of the digestive gastrointestinal (GI) tract, but it mostly affects the stomach and/or the intestines. For IBD in dogs, symptoms to look out for are majorly chronic vomiting and/or chronic diarrhea, weight loss, flatulence, and poor appetite are also just as common.

How is IBD diagnosed?

IBD is conclusively diagnosed after an intestinal tract biopsy reveals inflammation and other potential causes for this have been excluded. Biopsies could either be gotten via endoscopy or surgery.

How long can dogs live with IBD?

This varies from dog to dog. For very few of them, complete recovery is possible. However, for most dogs, this is a life-long condition but it is manageable.

Despite this, some dogs with IBD can respond well to treatment and enjoy a great quality of life. For the best outcome, it’s important to have IBD diagnosed, managed, and closely monitored by a vet doctor speedily

Some dogs do not respond to treatment and continue to deteriorate or suffer frequent relapses thereby hampering their life expectancy and quality of life.

Inflammatory bowel disease in dogs’ treatment depends on several factors such as the severity of the disease, which strategies have been tried already, and the personal preference of the dog owner.

In milder cases, it is possible that you may be able to reduce your dog’s medication by keeping your dog on an altered diet (typically young dogs with diet-responsive disease) that works for them or even stop daily medications with the supervision and recommendation of the vet doctor.

There is also the possibility that the IBD does not respond well to steroids, or if steroids are poorly tolerated in which case, alternative drugs may be used instead of or in conjunction with the steroids.