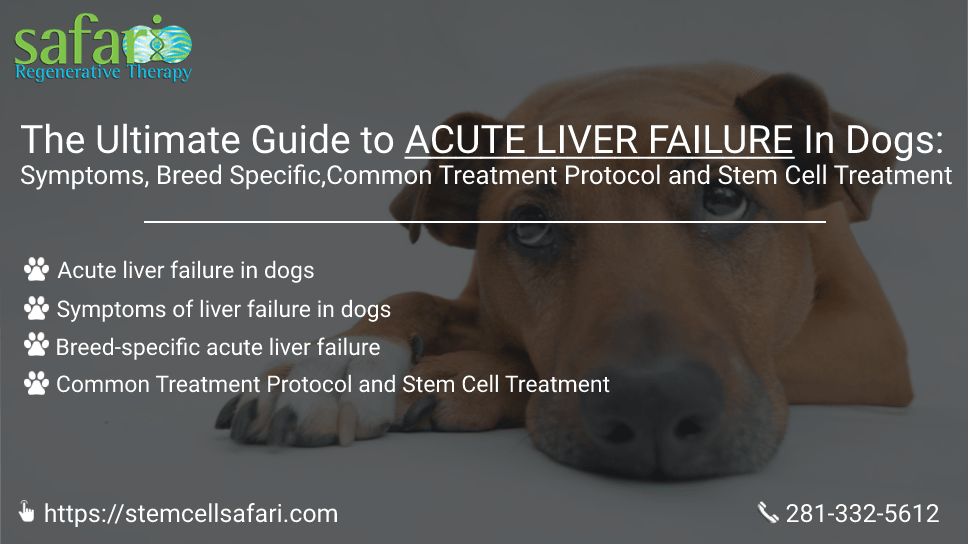 Acute liver failure, also known as acute hepatic failure, is a condition that causes the sudden loss of 70% or more of liver function due to sudden massive liver necrosis. Several situations or habits can cause liver failure in dogs. Exposure to toxins from molds or fungi, some kinds of mushrooms, drugs like analgesics, antibiotics, chemotherapy agents, and diseases like hepatitis are a few causes.

Symptoms of liver failure in dogs

These symptoms help identify liver problems in dogs to help provide immediate care to them to preserve their quality of life. Acute liver failure in dogs can be exhibited as follows:

Breed-specificity of liver issues in dogs does not mean that your dog will surely have liver diseases. It just shows that your dog is at a higher risk of liver disease than other breeds. Breeds that are predisposed to acute liver failure are Miniature Schnauzers and West Highland White Terriers. Although, other breeds can be susceptible, these breeds are predominantly affected.

Mini Schnauzers are more likely to have a liver disorder known as portosystemic shunt. In this disorder, some of the blood to be supplied to the liver goes around it instead. This deprives the liver of the needed blood flow and oxygen it needs to function properly, leading to cell death.

It is advised for these breeds that liver testing is done early to screen for any liver diseases in dogs.

Common treatment protocol for dogs with acute liver failure is hospitalization. Key treatment plans should include fluids and electrolytes, colloid replacements, and oxygen supplementation. Catheter feeding is highly recommended for unstable patients, while enteric feeding in small amounts in required for stable patients. Vitamin K and E supplementation with a protein diet is also advised.

Common medications administered for liver failure are antiemetics, hepatoprotectants, antioxidants, coagulopathy drugs, and hepatic encephalopathy agents. Moreover, since vaccination is a preventive measure, it should be considered because vaccinating dogs against acute liver infections like hepatitis will act as a preventive measure against acute liver failure. Also, avoiding potentially harmful toxins altogether in whatever form is helpful.