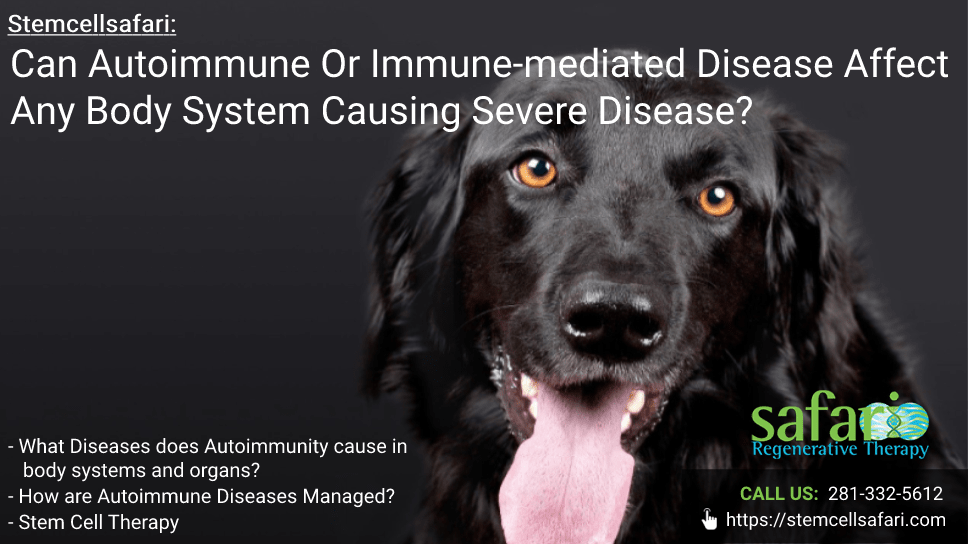 Autoimmune diseases occur commonly in pets and can affect different systems in the body, resulting in severe disease. Autoimmunity can happen in all kinds of pets of different breeds and ages. In autoimmune diseases, killer T–Cells destroy other normal body cells and destroy them. Ideally, immune tolerance is naturally maintained by regulatory T-cells formed in the thymus. These regulatory T-cells control the actions of killer T-cells.

What Diseases does Autoimmunity cause in body systems and organs?

How are Autoimmune Diseases Managed?

Because autoimmune diseases are life-threatening and difficult to treat conditions, they require strong immunosuppressants. Most of these immunosuppressive medications have major side effects and cannot cure pets of autoimmune conditions.

As a result, most pet owners have questions and concerns regarding the outcomes of autoimmune conditions ranging from the pet’s prognosis, side effects of the medications, and recurrent immune-mediated diseases.

For the best outcomes in treating pet autoimmune diseases, stem cell therapy is recommended. This is because stem cells produce regulatory T-cells, which help control immune tolerance and restore balance in the immune system. Immune tolerance happens when stem cells release anti-inflammatory chemicals where there is inflammation. The stem cells concentrate on the inflammation site and release chemicals. Stem cells also produce new regulatory T-cells and reduce the production of antibodies.

Stem cell therapy can cure autoimmune diseases and is a safer alternative than immunosuppressive drugs.

At Safari Animal hospital, we grow stem cells for autoimmune disease treatment in our laboratory. Our laboratory is the first of its kind in private veterinary practice. You can book a remote consultation or visit Safarivet affordable pet clinic Houston Texas, for information about autoimmune diseases in pets and the best therapy for your pet using stem cells.