Do you know Symptoms of Cardiomyopathy in Dogs And Cats? Here is Symptoms, Breed Specific, Common Treatment Protocol 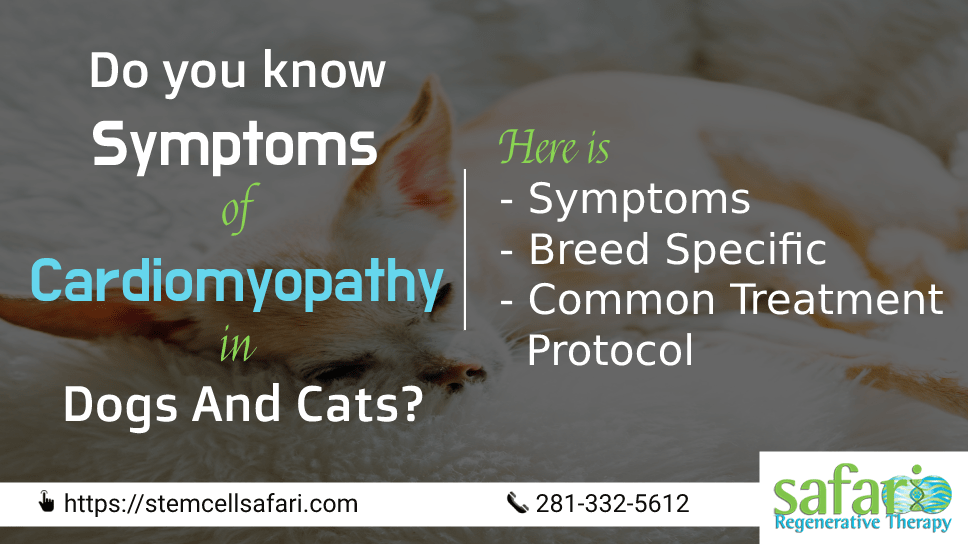 Cardiomyopathy is a frequent and severe cardiovascular disease affecting the heart muscle that makes it harder for the heart to pump blood to the rest of the body. Cardiomyopathy, which means disease of the heart muscle, can occur in both dogs and cats in different ways. The actual cause of cardiomyopathy in cats and dogs is not known; however, in some cases, it is due to a deficiency of taurine (a sulfur-containing amino acid essential in the metabolism of fats). Additionally, cats and dogs may develop the disease simply due to genetics.

Symptoms of cardiomyopathy may vary in cats and dogs. Symptoms in cats include rapid or shallow breathing, or difficulty in breathing, lethargy, and blood clots. However, most cats with hypertrophic cardiomyopathy do not show symptoms.

This disease causes the chambers of the heart to become enlarged and prevents them from functioning correctly. The heart progressively worsens and deteriorates until it is unable to pump enough blood to the lungs and body effectively. Fluid thus builds up in the lungs leading to Congestive Heart Failure.

In cats, the disease causes the walls of the heart to become thickened, decreasing efficiency, which can sometimes create symptoms with other parts of the body. The cat’s heart may beat rapidly, and eventually lead to the development of arrhythmias, congestive heart failure (CHF), and blood clots formed in the heart. Most times, the clots cut off blood supply to the hind limbs, causing pain or paralysis in extreme cases.

The method of diagnosis for cardiomyopathy in cats is an echocardiogram (ultrasound of the heart). This is carried out by a cardiologist to evaluate heart function. Although the cardiologist can detect the disease early, there is no cure currently known.

Treatment Protocol for cats and dogs

Drugs are available for cats that slow down the rapid heartbeat; diuretics are also available to control fluid buildup in the lungs and prevent the formation of blood clots. It is, however, advisable to have frequent checks with the veterinary doctor to track the progression of the disease, which would require ultrasounds of the heart and EKGs. Strict monitoring would also be needed for the cat at home.

Dogs are also placed on diuretics to reduce fluid buildup in the lungs, and other drugs with the benefit of better heart contraction and dilation of blood vessels for improved blood circulation. Diets with low sodium are needed. Radiographs, ultrasounds, and EKG are needed for close monitoring. It should, however, be noted that even with close monitoring, diagnosis is poor.

Although it has no cure, cardiomyopathy can be treated using stem cell regeneration by injecting stem cells into the heart muscle, pericardial sac, or coronary arteries. These cells release cytokines that act to repair the damaged heart muscle and regenerate lost cells. Stem cell treatment at an early stage is more effective than later.

The cost implication is usually quite high once the cost of prescribed medication, ultrasounds/EKG, and monitoring are taken into consideration for your pet.