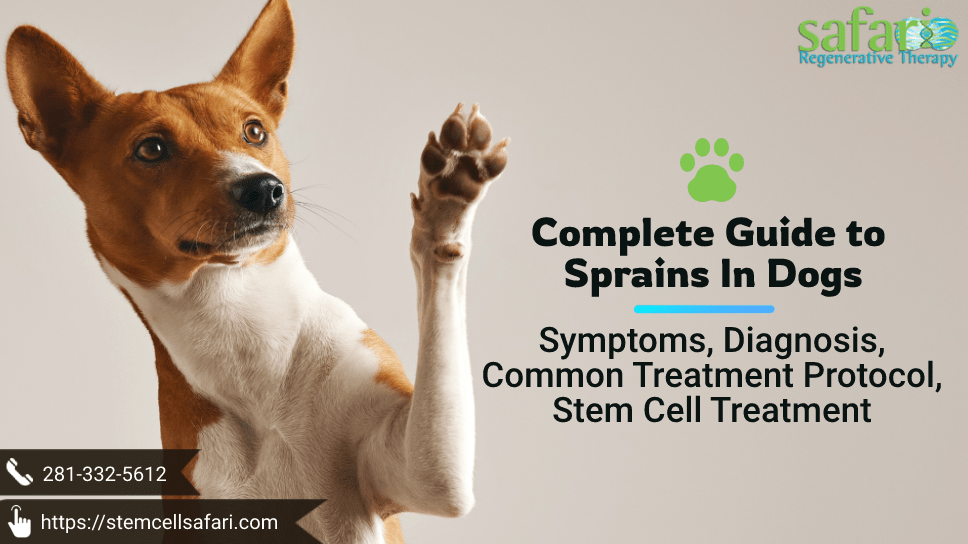 A sprain is a soft tissue injury involving damage to a ligament (usually a tear) caused by physical trauma. Sprains in dogs occur when the joint associated with a ligament stretches beyond its functional motion range. Sprains can happen at any joint; but are most common in the knees, elbows, and ankles in dogs. Dog sprained front leg, sprained ankle on the dog, and dog sprained wrist is acquired through physical activity, joint degeneration, and traumatic accidents.

Sprains in dogs can be grouped into three categories, depending on the extent of damage to the ligament and surrounding tissues. Sprains have similar symptoms as several other disorders, like fractures, muscle strains, and bone degeneration. A sprained leg in dogs should be evaluated by professional veterinarians.

Symptoms of Sprains in Dogs

Dog leg sprain symptoms range from being barely noticeable to temporarily crippling. This depends on how severe the sprain is. They include:

Although not common, sprains can also occur in other body parts with ligaments such as the hip joints, shoulders, and tails.

Diagnosis of Sprains in Dogs

Because sprains share similar symptoms with a range of other conditions, imaging tests might be required to differentiate between sprains and other conditions. Veterinarians typically carry out a detailed physical examination first, focusing on the joints and muscles.

Radiographs (x-rays) and ultrasounds are used to view the joint and surrounding bones better to rule out fractures and other conditions. Another imaging technique used is arthroscopy. It is a surgical procedure involving inserting an endoscope into the joint via a small incision. After evaluating the sprain, it is classified into one of the following grades:

Grade I – Involves a minor tear in the ligament, and the joint is still functional. Although there is some swelling and pain, the dog can still walk.

Grade II – Involves a larger tear or stretch in the ligament and severe swelling. The joint is partially functional, and the dog might experience some lameness or difficulty walking.

Grade III – Involves severe damage or total damage of the ligament and a possibility of the bones not remaining intact. Dogs with grade III sprains will probably not want to put any weight on the affected paw.

Treatment of Sprains in Dogs

First aid for sprains before meeting the vet involves using an ice pad or cold therapy on the affected joint. It helps alleviate pain and swelling and prevents the dog from making the injury worse.

For Grade I sprains, only minimal care is necessary. Placing a splint over the joint to prevent movement and prescribing anti-inflammatory medicines are recommended for Grade I sprains. Generally, they take several weeks to heal, but the affected joint heals fully.

Grade II sprains are also managed with splints and anti-inflammatory medicines. However, because there is increased trauma, corrective surgery might be needed. Grade II sprains heal completely but might have a longer recovery time if surgery is done.
Grade III sprains mostly require surgery to remove or repair the damaged ligament. For a Grade III sprain to be completely healed, a prolonged healing time is needed. The surgery carried out on the ligaments might be a traditional surgery or laser surgery.

Surgical treatment for dog sprained leg has high failure rates because ligaments are hard to reach within the joints. Surgical stabilization of the joint mostly involves using artificial implants to mimic ligaments. Implants sometimes cause complications such as infections and result in high failure rates. Dog sprained leg recovery time is usually dependent on the sprain classification and the treatment used.

Stem cell therapy in dogs is the recommended treatment for sprains. To be effective, the stem cells must be injected into the affected ligament.